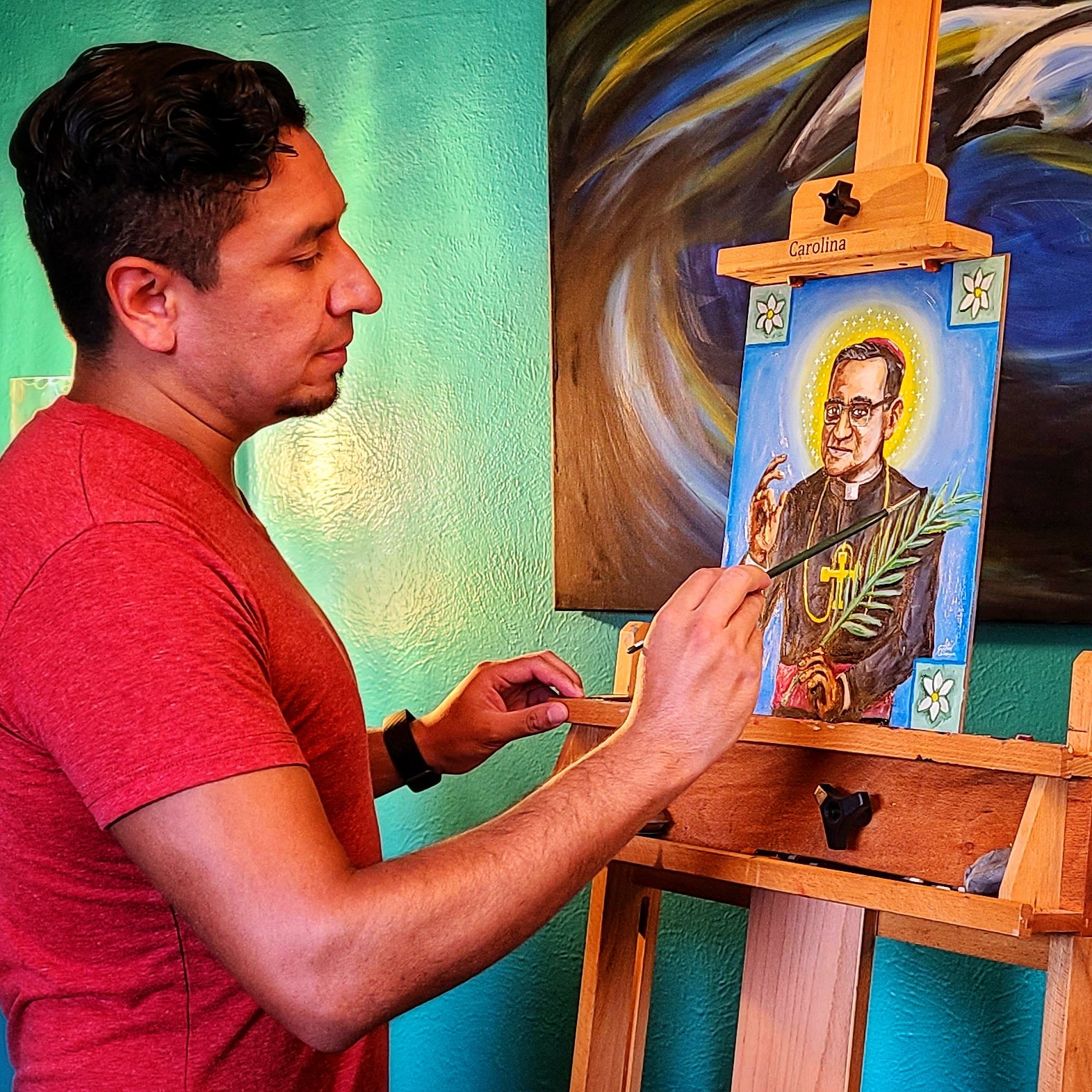 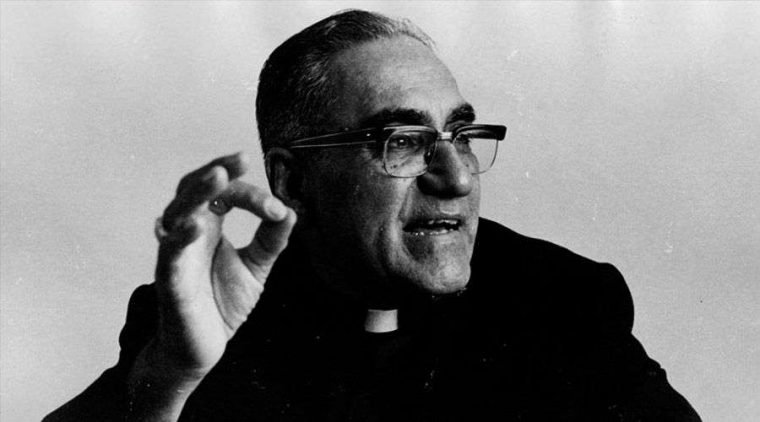 In a time when his people were being persecuted and killed, Archbishop Óscar Romero, bravely spoke out against the crimes and injustices in his land of El Salvador. He did so until he was shot through the heart while celebrating Mass in 1980.

This is a commission portrait of Saint Óscar Romero from El Salvador in honor of his great work from a fellow Salvadoran. He was a Roman Catholic bishop from the 70s that was martyred by the government of El Salvador. He is known for his heroic virtue of courage and love. 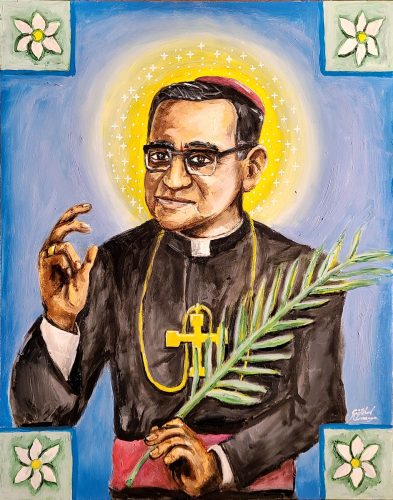 Symbols of the Painting 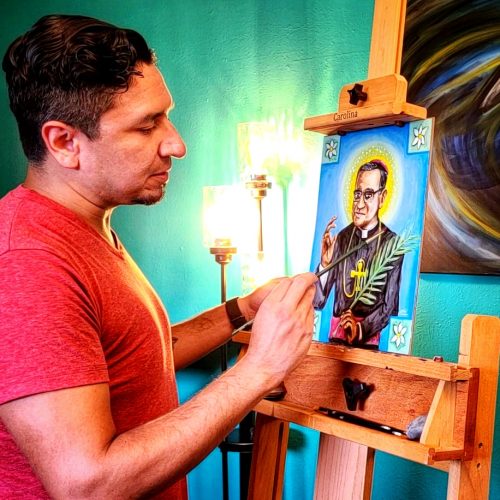 In many of my saint portraits, I use frames as a tie to the many traditions of sacred art that use frames to remind us they are windows to heaven. The blue background is also a traditional symbol of heaven. I typically use even richer colors but adjusted for the space this work will live.

There is a flower on each corner is representative of an open Flor de Izote, the national flower of El Salvador, and a lily, a symbol of the Virgin Mary and of all saints. His birthday is August, 15th, which is the great Marian solemnity of her Assumption into heaven. 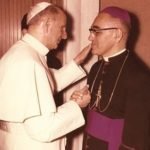 The Office of Bishop

He is wearing a traditional black bishop’s cassock with a purple fascia and zucchetto along with his bishop’s ring as symbols of his office as a living apostle. 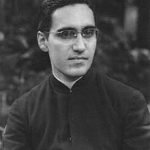 The light halo is dotted with little crosses as a subtle sign of his martyrdom and union with the death of Jesus.

The palm branch in Romero’s left hand is in a traditional, triumphant pose used in art of martyrs (Revelations 7:9). This is to emphasize the title of martyr that has been questioned by some that believed he became too politically involved by the end of his life. His positions may be political by default of standing up against an oppressive government, but at the core, he was a man living his calling as a shepherd to his people. A man that sought to defend and encourage his people in a time of great suffering. Many of the martyrs of the Church died at the hands of a government that wanted to suppress the faith, and their acts of defiance could also then be considered political in nature. 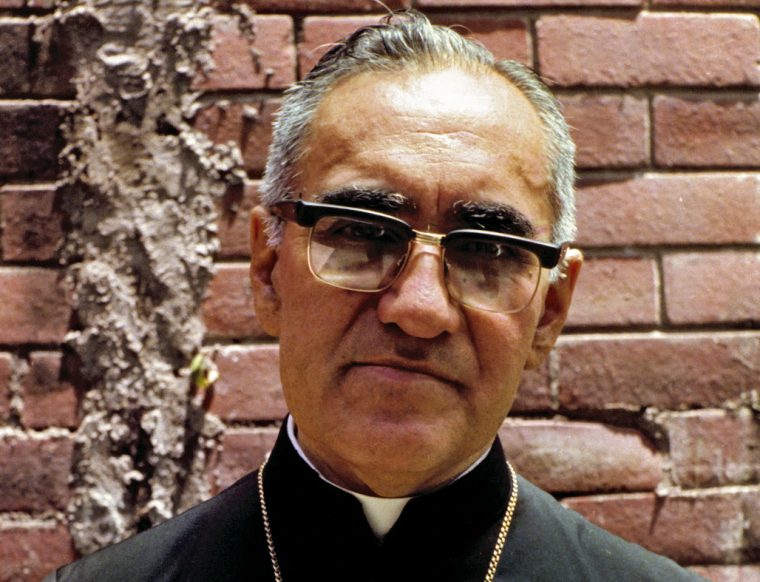 Romero’s pose in this portrait is him in the middle of offering a blessing. My hope is that this offers some peace to anyone that feels worn in doing work for justice. He is an example of living boldly, centered on a deep faith in Christ, to take action. He knows how challenging it is, but he offers us a blessing to go forth.

A Prayer of Oscar Romero 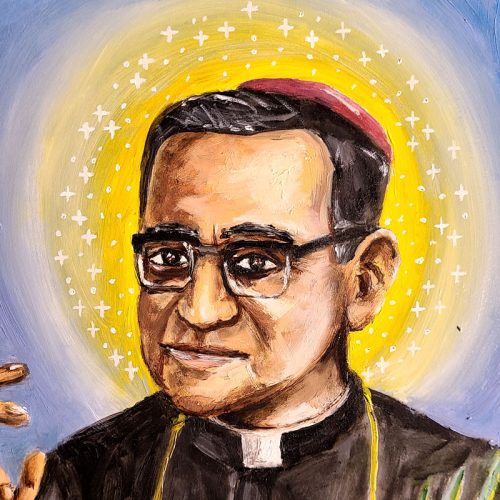 It helps, now and then, to step back and take a long view.
The Kingdom is not only beyond our efforts,
it is even beyond our vision.
We accomplish in our lifetime only a tiny fraction
of the magnificent enterprise that is God’s work.
Nothing we do is complete,
which is a way of saying that the Kingdom always lies beyond us.
No statement says all that could be said.
No prayer fully expresses our faith.
No confession brings perfection.
No pastoral visit brings wholeness.
No program accomplishes the Church’s mission.
No set of goals and objectives includes everything.
This is what we are about.
We plant the seeds that one day will grow.
We water seeds already planted,
knowing that they hold future promise.
We lay foundations that will need further development.
We provide yeast that produces effects far beyond our capabilities.
We cannot do everything,
and there is a sense of liberation in realizing that.
This enables us to do something,
and to do it very well.
It may be incomplete, but it is a beginning, a step along the way,
an opportunity for the Lord’s grace to enter and do the rest.
We may never see the end results,
but that is the difference between the master builder and the worker.
We are workers, not master builders;
ministers, not messiahs.
We are prophets of a future that is not our own. 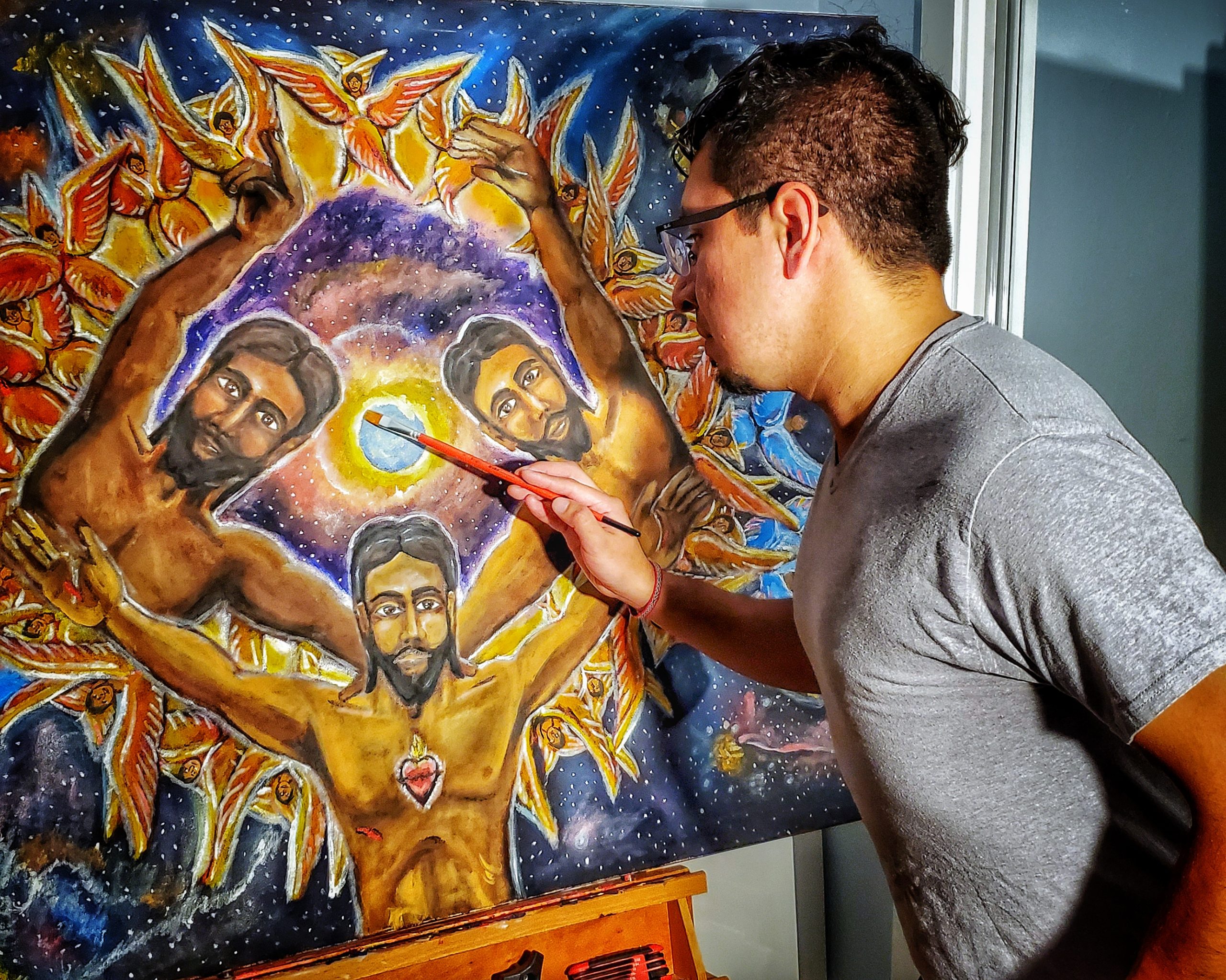 Has Visto al Padre (You Have Seen the Father) 48×36 inches oil on canvas painting.

I had the first idea for this painting back in June 2016 when going to a funeral. I drew out some concepts focused on the theme of the Trinity through the approach of Spanish colonial art that represents the Holy Trinity as 3 unique Jesus characters since Christians believe that it is indeed 3 distinct persons in 1 being.

This is not a liturgical or even traditional piece. It’s a product of my own exploratory visualization of a central mystery of my faith. 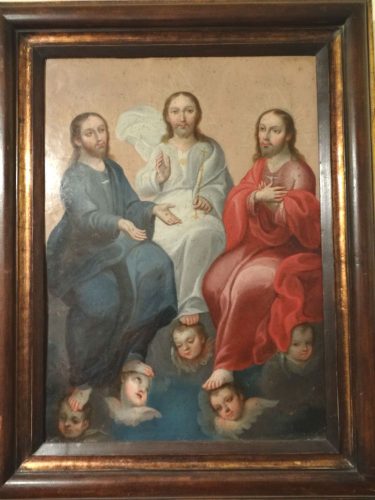 Spanish Colonial Painting of the Trinity 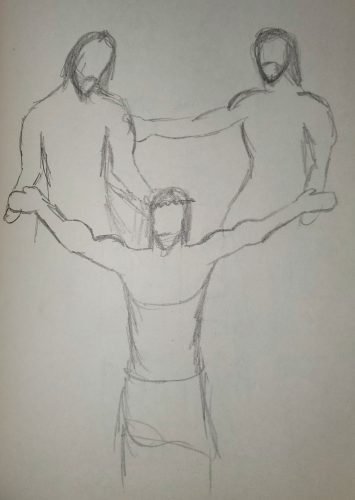 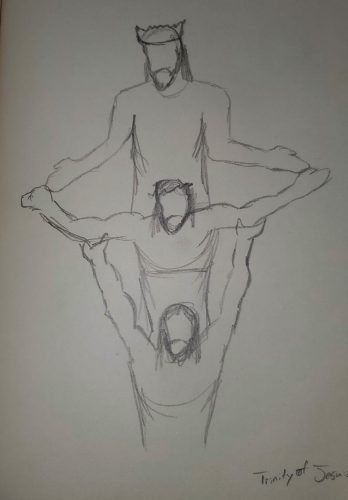 It may seem a little strange but there is a verse in sacred scripture that gives good precedent for this interpretation:

I became fascinated with visualizing the Trinity back in late 2015 when I attended a JPII Healing Center retreat that focuses on leading participants to lead a life within the graces of the Trinity where we can find the most peace in life. The retreat features a living sculpture that demonstrates three people circling their arms around each other while surrounding the person from above. I used this as the central pose of the piece. Framing it from the perspective within the circle. 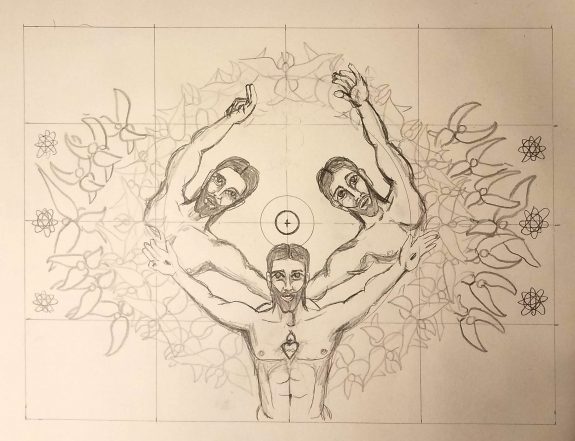 Final Drawing in prep of painting 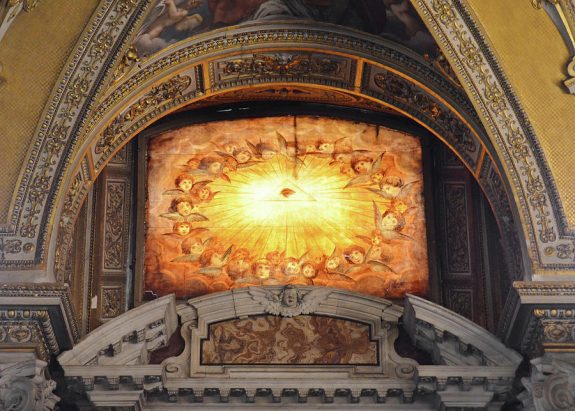 The trinity is a common theme in art, but I’ve never been fond of the pieces that make the Father a Santa-like figure or the Holy Spirit just a white dove. They don’t communicate to me the depth of the living persons of the Trinity.

The mysterious symbols of an all-seeing eye also don’t communicate the relational aspects of the Father, Son, and Holy Spirit to me. I do appreciate the symbolism and visual, so I used this piece as an inspiration for the layout.

The old Eastern depictions of the Trinity as angels with Abraham also helped inspire the details of the three. 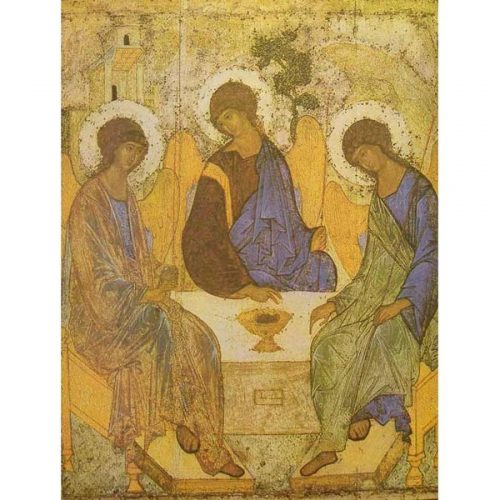 The Icon of the Trinity by the Monk-painter Andrei Rublev

Seraphim – the 6-winged angels that surround the throne of God

Cherubim – the 4 winged angels and are just behind the seraphim 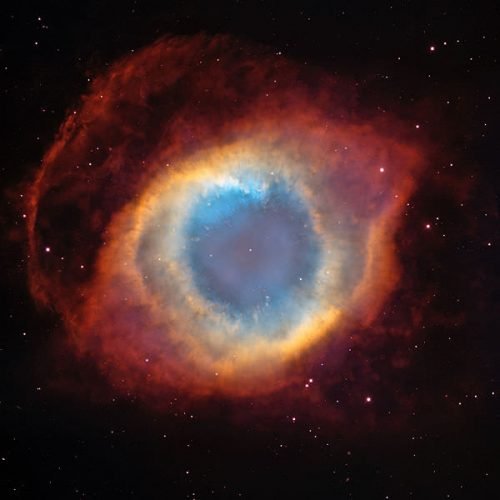 The 3 persons of the Holy Trinity are intentionally depicted as distinct versions of Jesus from different cultures. Most of my art features skin tones and cultures that depict important figures in non-European characteristics to show the diversity of the Church and God’s willingness to relate to us where we are.

It took a long time to get to the pieces because I kept putting it to the side and lots of life changes in between. 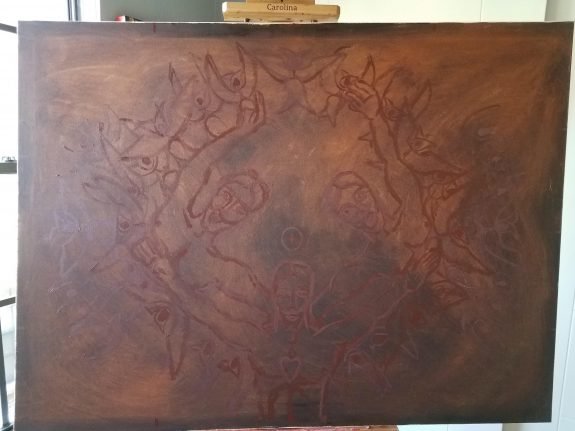 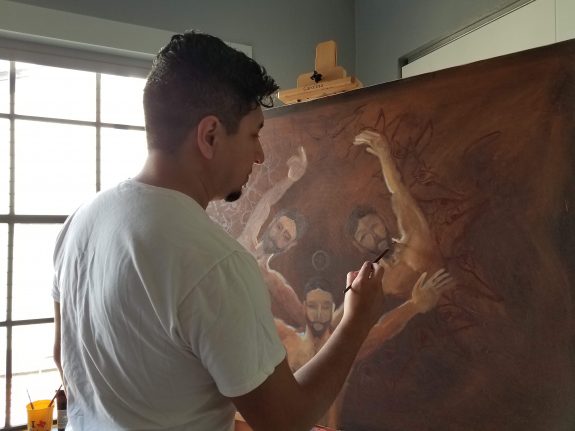 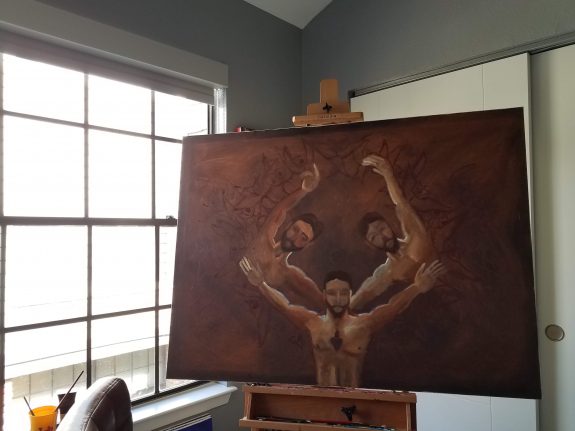 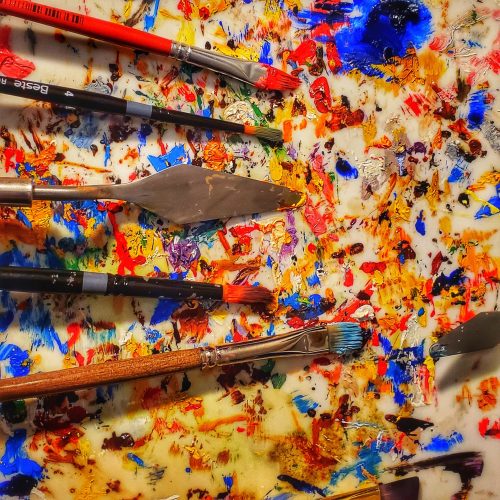 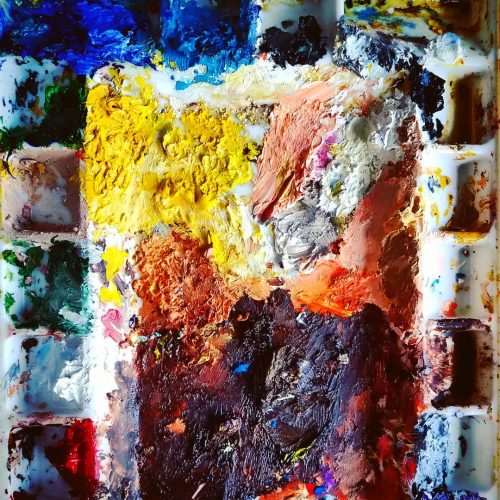 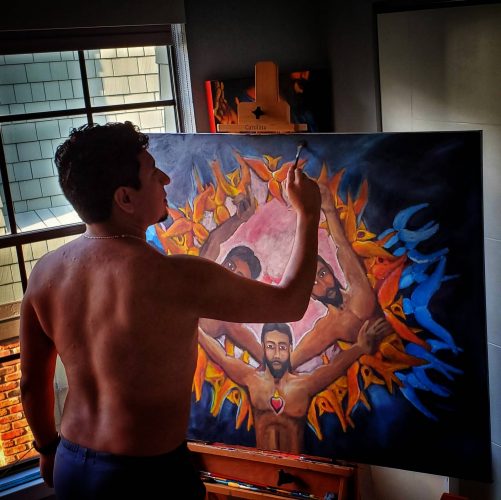 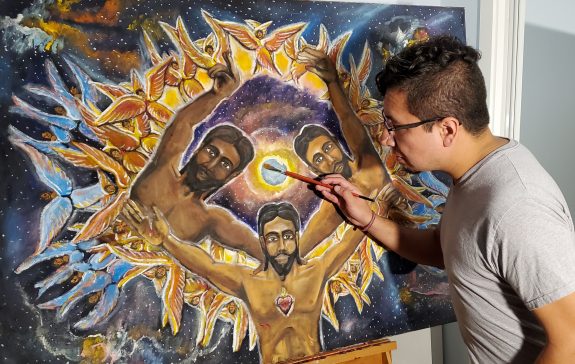 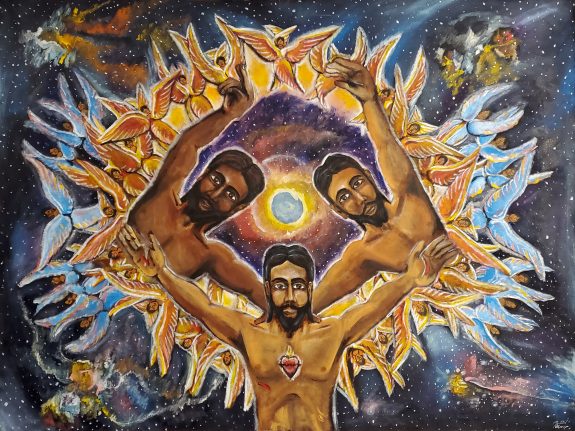 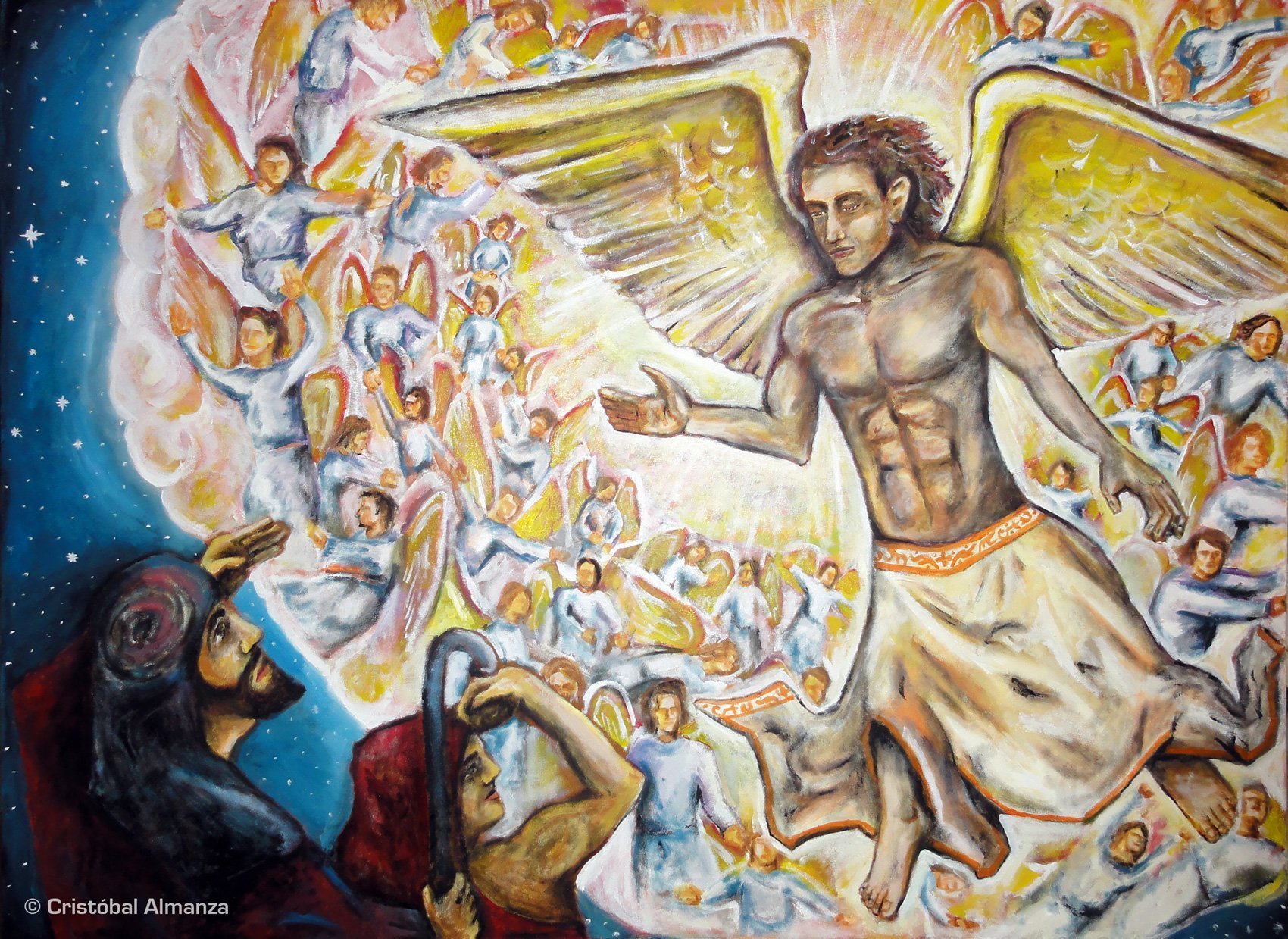 Praise of the Heavenly Host [Painting]

I have a deep love for the angels because they have played such a huge part of my life ever since I was a child. END_OF_DOCUMENT_TOKEN_TO_BE_REPLACED