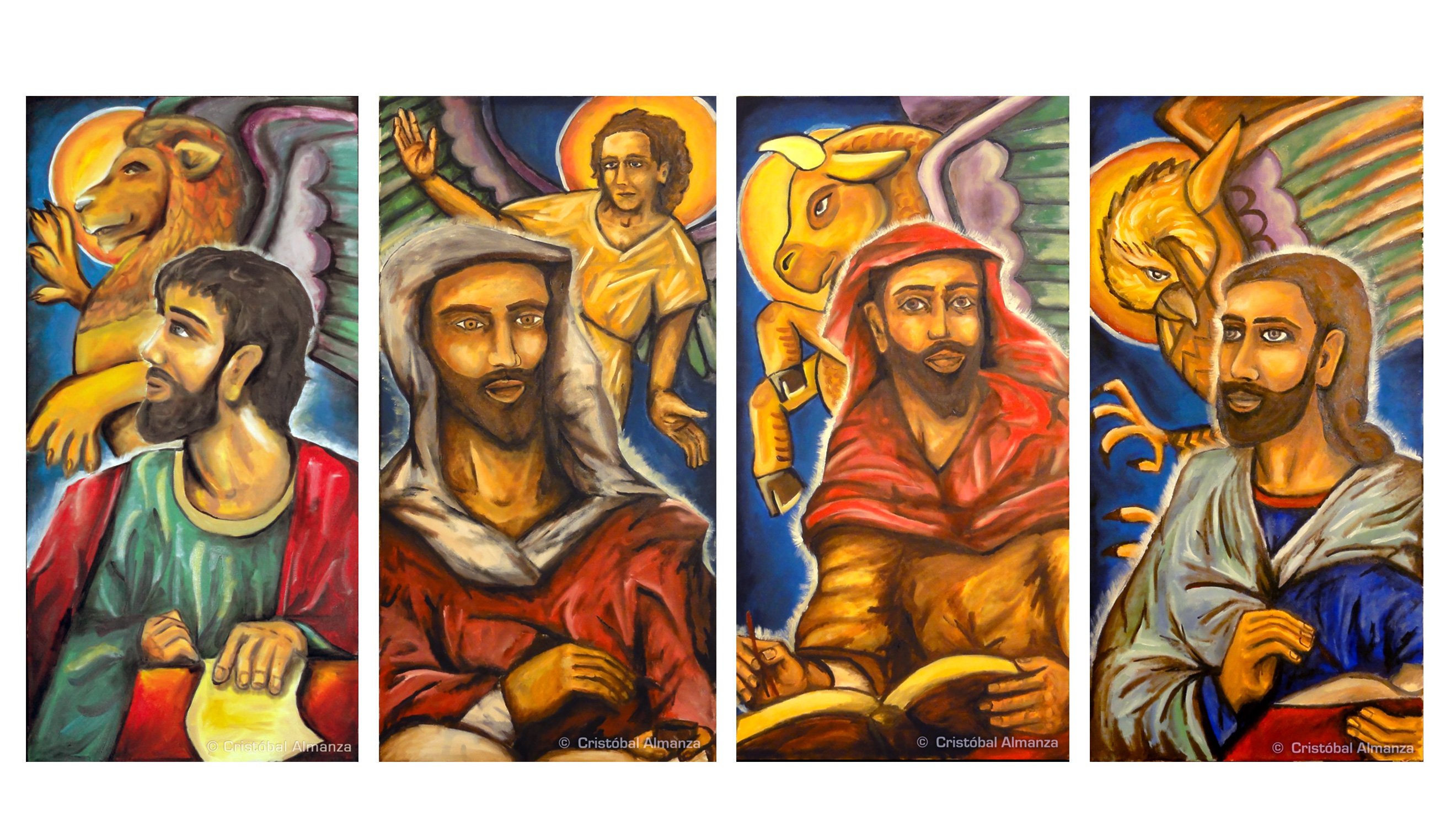 In 2015, I painted and published a post about the first painting in my series featuring the 4 Evangelist. I began with the full intention of finishing the series in the coming months, but there were several paintings that had to be prioritized before I could continue.

This summer, I dedicated some time to finish the 3 paintings at the same time. For the first time, I worked on the 3 simultaneously waiting for different parts to dry and mixing colors that could be used across all of the paintings. I’m not completely convinced about the effectiveness of this method, but it did help me in finishing the paintings faster and close to the same time. We’ll have to see if this process is ever repeated in future series projects.

As explained in the first post, this is a continued exploration of the theme of angels that is very dear to my heart. The portraits of the four evangelists prominently depict the angels of inspiration signified by their traditional symbols of each Gospel. Each portrait is at a moment of Divine inspiration through an angel as the Evangelist writes their account of the story of Jesus. As messengers (the meaning of the name “angel”), they are the agents of inspiration for the writing of the Great Story of Jesus.

Each of them is shown in a way that is not intended to be exactly realistic because it is unlikely that the angels made themselves visible in the real experience. Instead, they communicate characters and a story of how these four great men ended up writing some of the most important text in our human history. 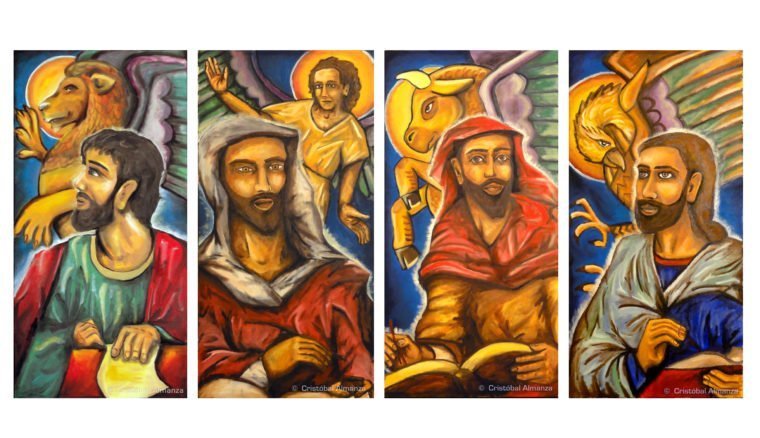 The Four Gospels have ancient symbols that are used to depict the character of the story. Independently of their reference to the four evangelists, these figures can also be shown as the important marks of the great story within themselves. It can simplified to the Incarnation (Matthew), the Passion (Luke), the Resurrection (Mark), and the Ascension (John). 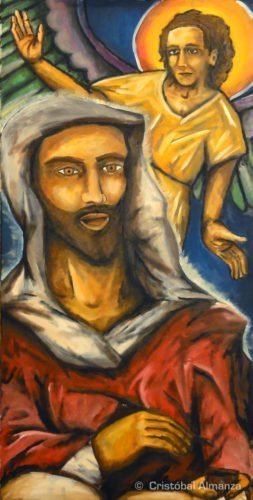 The Gospel of Matthew is represented by a winged man. The symbol of a man was chosen because it is the only one that begins with the genealogy of Jesus and emphasizes the Incarnation of God made man. Through his edition, Matthew also focuses on the humanity of Jesus over that of His Divinity.

St Matthew is also robed in red because of his martyrdom in Ethiopia ordered by the king. Tradition states that he was martyred while celebrating mass and testifying to the Lordship of Jesus Christ.

This Gospel is traditionally ordered first in the Bible, but it is known to be the second one written and therefore went second in the series. 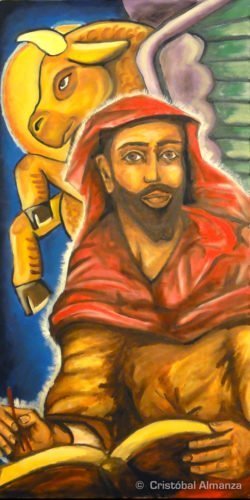 The Gospel of St Luke is represented by a winged Ox or Bull. The ox was considered a prize sacrifice and the ultimate sacrifice offered by Jesus Christ upon the cross. The blood spilled by the perfect sacrifice is what won us atonement of our sins.

St Luke is also covered in red for the martyrdom he won in Rome after the death of Sts. Peter and Paul. Tradition says that St. Luke came before Nero the Emperor, the Emperor asked him, “How long will you lead the people astray?” St. Luke replied, “I am not a magician, but I am an Apostle of the Lord Jesus Christ, the Son of the Living God.” The Emperor commanded his men to cut off his right hand saying, “Cut off this hand which wrote the books.” The saint replied to him, “We do not fear death, nor the departure from this world, and to realize the power of my Master.” He took up his severed hand and made it reattach to its proper place. Those who were present marvelled and the head of the Emperor’s cabinet and his wife believed along with 276 others. The Emperor wrote their decree and ordered that their heads be cut off together with that of the Apostle St. Luke; thus their martyrdom was completed. 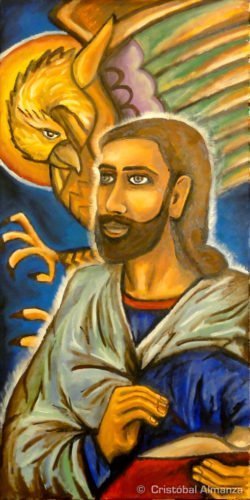 The Gospel of St John is represented by the symbol of an eagle. The only one of the four creatures that naturally has wings. The eagles soars into the heavens reaching the most sublime heights that are shared in the edition from St John. He is also the one to write about the Ascension of Jesus as He enters into heaven body and soul.

The eagle is often depicted in symbols of the gospels such as ambos and bible covers because it is the most comprehensive of the Gospels. St. John is unique among the Evangelists and Apostles in that he is the only one that was not martyred. In my series, he is not depicted robed in red like the others but does have a red trim for his direct witness of the Passion of Jesus upon Calvery.