One of my favorite themes in creating art over the last several years has been a focus on angels. It’s a devotion that extends most of my life and is a constant source of inspiration.

The winged creates that represent the 4 Gospels and evangelist are old symbols in iconography that has always fascinated me. They always looked like funny angels to me, and interestingly enough, they do have a similar source. 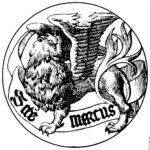 The imagery of the cherub in the book of the prophet Ezekiel is one of the most common cited sources of these 4 symbols. (Ezekiel 1:1-14 and 10:1-22) There is also a different set of four creates described in the book of Daniel, but these represent empires and are not related. (Daniel 7:1-8)

These four creatures are symbols of their inspiration and are often used to represent the different elements of Christ that they reveal. Mark’s Gospel begins with Jesus in the desert and the preaching of John the Baptist proclaiming Christ “like a roaring lion.” 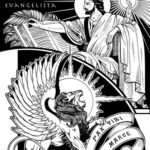 The lion is often seen as the king of the jungle and used a s royal emblem. The winged lion is a symbol of Christ as the King. Even in movies like the Wizzard of Oz, lions are associated with courage, and it also stands as a reminder to Christians of the required courage to live the way of Christ. 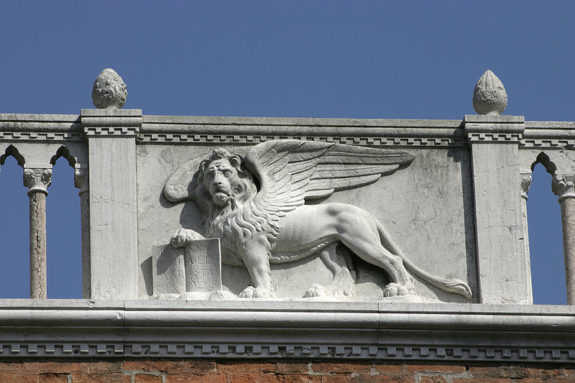 Venice is one of my favorite cities in the world, and one of the parts I appreciate the most is that it is the resting place of the body and relics of St Mark the Evangelist in the basilica. The city has since taken on the symbol of the winged lion as their symbol. If you ever visit the city, you will be sure to the see the symbol everywhere.

This symbol can also be found around the world because the concept and imagery is powerful. There is also something inspirational to see such a powerful creature.

On April 24th, the feast of St Mark, I shared an Instagram picture that previewed the image, but I still had a few details to finish. The painting is done in my typical style, but the lion is intentionally stylized to emphasize that he’s not a typical lion. The style is most noticeable in the lion’s mane in textured and his paws are distorted. He is also the one with the halo to show the heavenly inspiration in writing the Gospel. Finally, St Mark is covered in a red cloth to represent his martyrdom and the color used on his feast day.

I plan on working on the painting of the other three evangelist this year to match in size and style.