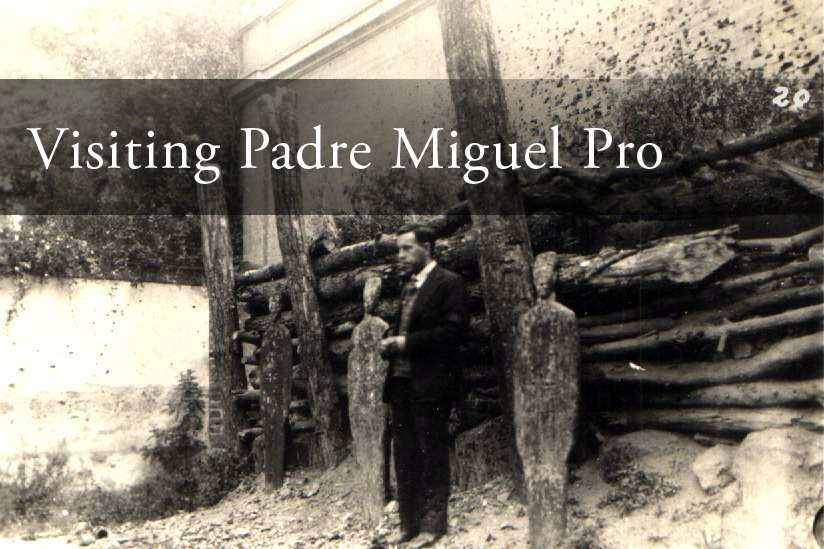 Have you ever wondered how much you really believe?

I spend a lot of my time trying to learn more about what the faith teaches. Still, there has been many times when I’ve thought about many of the great saints and martyrs and wondered if I truly believe as much as they did in this world?

My wife and I went on a pilgrimage last year to various holy sites in the Mexico City area. Our very last stop was a very powerful experience in my life, and moved me more than I ever expected.

We were blessed with the opportunity to visit the church of La Sagrada Familia, a Jesuit parish near the center of Mexico City that houses the first and many second class relics of Blessed Miguel Pro. I wasn’t really sure what to expect because I hadn’t had too much time to look up much information before we got to visit.

We got a little concerned when we arrived to find the main doors of the church locked, but we kept hope when we saw the attached museum open. While we waited to hear if they could let us in, we took some time to walk through a museum full of some of his belongings, including personal letters, vestments, and mass kits.

When we reached the middle of the exhibit, I saw one outfit that I looked over at first. I looked past it as I read excerpts from his letters displayed on the wall, and was captivated by the boldness and courage in his words. Then I saw that the outfit in the case was the outfit covered by the blood of this martyr at the moment of his death. Realizing that the blood-stained vest was more than just posterity, but seeing such a witness of faith firsthand  was an emotional experience I will never forget. 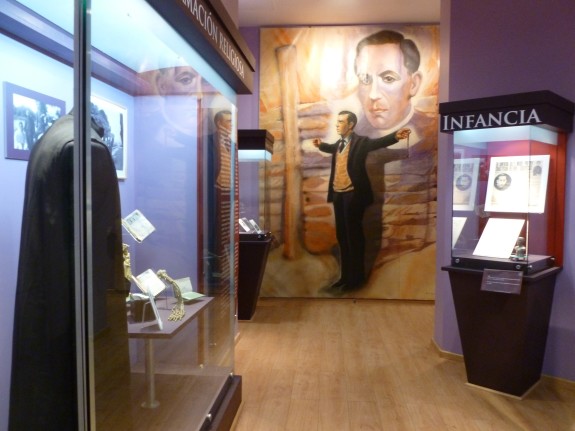 The Faith of Padre Pro 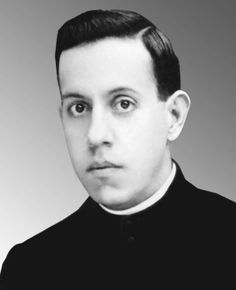 José Ramón Miguel Agustín grew up in a loving, devout Catholic family where he was able to gain a solid foundation and good education through their moves from Zacatecas, Mexico City, and to Monterey. His unique personality was marked by his sense of humor, guitar playing, and creativity in writing comics.  One of Miguel Pro’s most noble characteristic was his love for the poor even though he came from such a wealthy family.

There are various stories of his intense faith, even as a child. His mother, Josefa Pro, once told him the story of the martyrdom of a saintly Franciscan in the area years before. Unlike most children, Miguel Pro was filled with courage and inspiration. He told her, “Mother darling, I also would love to die a martyr’s death!”

That same faith would only develop stronger as he grew, and Padre Pro followed it into the seminary until he was exiled. He finished his priestly formation and was ordinated through the Society of Jesus in Belgium in 1925.

Here are some of my favorite quotes of Padre pro highlighting the intensity of his faith and fearlessness of martyrdom:

“It is not, Provincial Father, humility or desire to appear as very brave, it is only the conviction that I have before God how useless I am and how little I am worth, and what good I can be to greatly encourage countless people … if not, we abandon our brothers and sisters today that are in such need of the aid of the Church. The most they can do is kill me. But it will not until the day and hour that God has reserved for me.”

“My Life?  but what is it? Wouldn’t I gain it if I give it for my brothers? 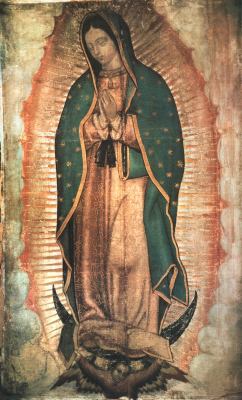 As a child, Miguel was accidentally poisoned by a rotten fruit resulting in a year of being mute and dazed for a year because the infection reached his brain. His parents took him in petition before the holy image of Our Lady of Guadalupe and he was miraculously healed.

In another story, his shoe lace was caught on a railroad track and his prayers of intercession to Our Lady helped him escape what looked like his imminent death.

Later in his life, once he had been ordained, he suffered from many stomach ailments and other serious illnesses. Before he returned to Mexico, Padre Pro made a personal visit to visit the grotto of Our Lady of Lourdes where he spent some time and received healing, strength, and encouragement to continue his mission on to his homeland of Mexico.

His Jesuit education helped his intellectual formation, but his heart is often what is most attractive. That deep love of people, family, and Mary are parts that make this heroic man so human and relatable.

Persecution and Ministry in Mexico

He would often dress as a beggar to collect money for those in need, dress as a wide variety of professions to secretly bring confession and the Eucharist to the faith Catholics in the community. Throughout Mexico City, he could be found celebrating weddings, baptizing children, anointing the sick, and providing the Eucharist. The whole time, he was risking his life because public worship was explicitly outlawed and priest would be arrested immediately.

Word was getting around about this illusive priest, and President Calles found a way to blame a failed bomb attempt on Padre Pro and his brother Humberto. With the target zeroed in on the brothers Pro, they were quickly captured and sentenced to death. 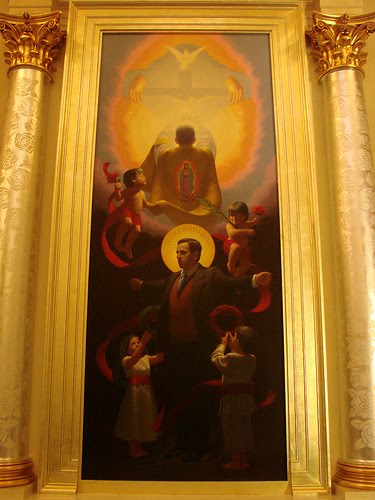 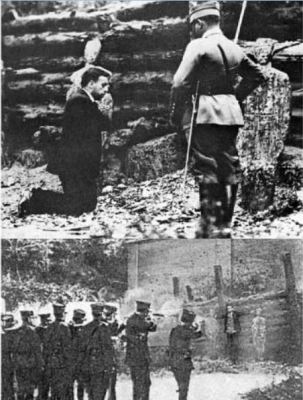 Padre Pro’s last day in prison, he blessed the firing squad and then knelt and prayed silently again offering his life as an offering for the people of Mexico and the Church. Then, he boldly refused a blindfold.

Padre Pro confidently stood facing the firing squad, and with a crucifix in one hand and a rosary in the other, he held his arms outstretched in a cruciform posture. His last words were proclaimed clearly for all to hear, “May God have mercy on you! May God bless you! Lord, Thou knowest that I am innocent! With all my heart I forgive my enemies!” As the soldiers lifted their rifles, he exclaimed in a loud voice, “Viva Cristo Rey!” – “Long live Christ the King!”

At first attempt, the firing squad’s shots failed to kill Padre Pro, but he finally died when shot point blank. President Calles ordered journalist to document his death so that it would be a warning to all priest and scare those that held on to the faith.

Over 40,000 people lined the streets for his funeral 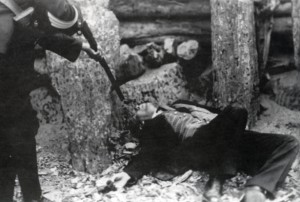 procession in a time when their actions were considered illegal. Another 20,000 waited at the cemetery to see him buried. There was no priest openly present, but Miguel Pro, his father, was present to say some last words in honor of his heroic son.

Against the wishes of President Calles, that image of Blessed Miguel Pro’s martyrdom was carried close by the many soldiers that fought hard in the Cristero war until they regained their religious freedom to practice their faith openly. 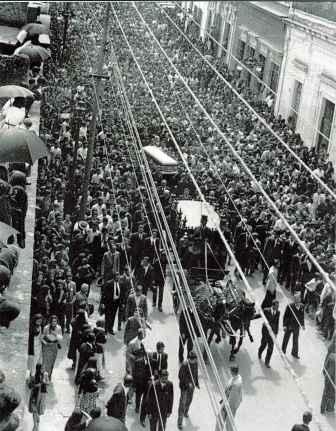 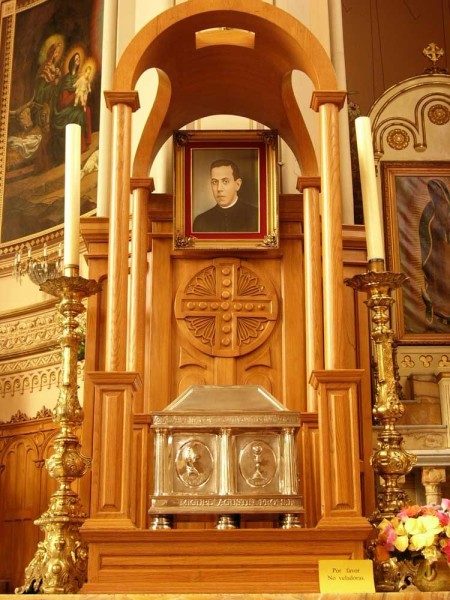 I keep this same image in a place of honor in our home and reflect on it daily since we visited his created relics. We were blessed that the staff at the museum found a way to let us in a for a few minutes to finally be able to visit him inside the beautiful church of la Sacrada Familia. May his life continue to inspire a deeper conviction of the faith for the people of Mexico.

His life speaks to me deeply on many levels, but one fact connects personally with me: he was born within a hundred miles and few years of my grandfather. I hope that I can develop a love for the Lord as detached from this life as Blessed Miguel pro had. There is something powerful about celebrating his feast day on the Solemnity of Christ the King this year, and I find inspiration in how the Lord can work in our lives if we’re open to His love. 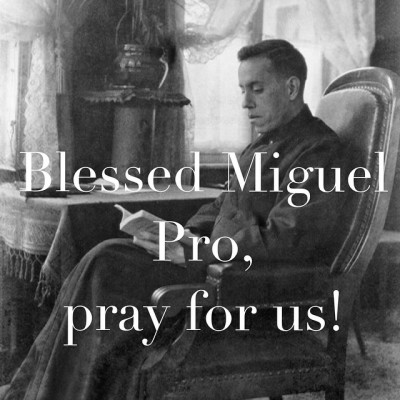 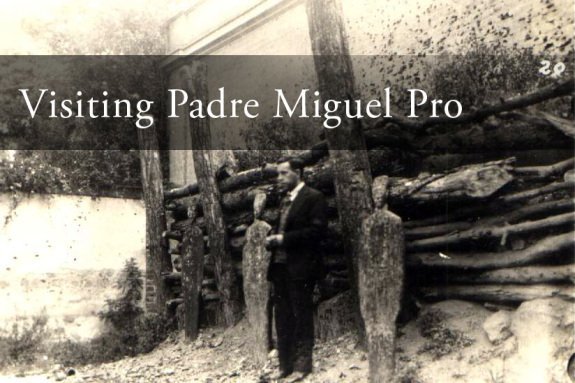 All stories by : Cristóbal Almanza
You might also like
Painting of the Martyr, S. Óscar Romero
August 17, 2020