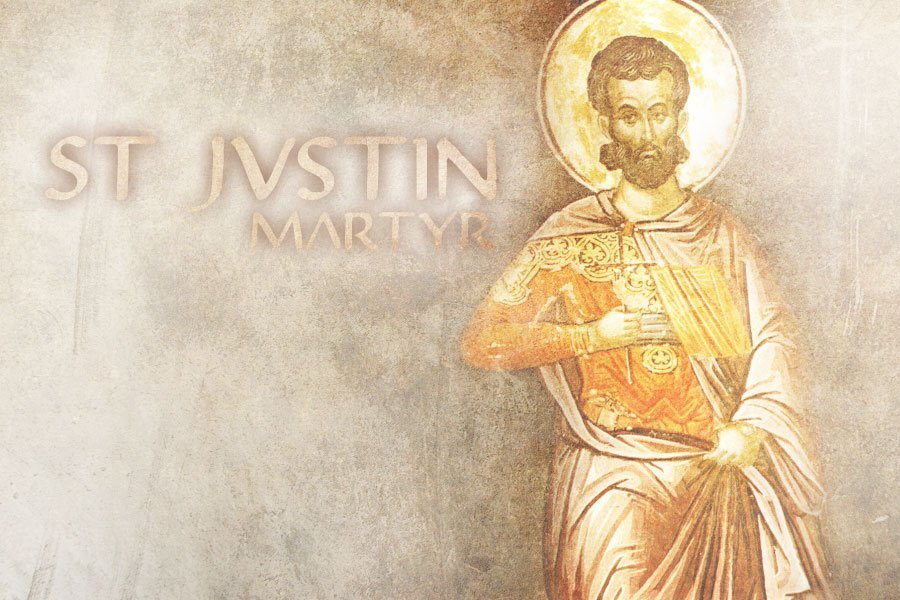 June 1st if the feast day of St Justin Martyr in the Roman Catholic Church. It saddens me that many people don’t know who he is. I have a personal mission to make sure more people get to know him, and I hope he can be knows as more than just one of the early, obscure Church martyrs.

St Justin is considered the first great apologist of the Church. He was a pagan philosopher that converted to Christianity after he could not find satisfaction in other philosophies and traditions. In his heart of hearts, he knew that all his studies in Rome would lead him nowhere, even when he didn’t know of God. Through conversations with a Christian, he came to discover Jesus and sacred scripture. It was then that the Truth spoke to him so clearly, and he knew that it was undeniable. After his conversion, he used his love of reason to teach a pagan world about the Truth that lives in Christianity.

It was his writings on the Eucharist that touched my heart the most when I began to do research on why he was a saint. In the second century, he brought light to the Truth in a world full of darkness, and he did it all as a layman. He fell in love so deeply with The Logos, Jesus, that he willingly died defending it. Although, he did not die before converting many hearts through his preaching, writing, personal conversations, and simply sharing the love of Christ.

St Justin is also very special to me because he is my patron saint from confirmation. There were many reasons why we connected, but it was his unwavering passion for Truth that really inspired me. At the time, I wasn’t sure that I could truly believe in something so deeply that I would tell the world and even die for its sake. It was his testament that inflamed my desire to love the faith as much as he did.

In September 2006, I was on a private tour of  Immaculate Conception Church in Rome with some seminarian friends. This church is famous for a crypt-ossarium that consists of bones from 4,000 different Capuchin friars that died in the 16th-19th centuries. It a little odd, but it has really interesting art and powerful message for our mortal bodies and imminent end. I recommend reading this interesting post from Cardinal O’Malley’s blog about his visit there (half-way into the post). He also has some good pictures of the site.

When the Capuchin Friar leading the tour got to the altar of the back chapel, I read the Latin wording on the altar that indicated it was the tomb St Justin, and I fell to my knees. It felt like suddenly running into a long lost friend. It was a moment of pure joy and thanksgiving.

The power of the communion of saints hit me at that moment, and I was deeply touched at the blessing of visiting where his relics lay. To this day, it is one of the most beautiful blessings that I have personally experienced – to visit an old friend and thank him for his prayers for me during some of the most pivotal points in my life.

Some may find it weird, even down right morbid, that I would kneel in prayer in the place of where a man’s remains are stored. It may be even harder for some to understand that I feel such a deep and personal friendship with a man that died over a millennium before I was even born.

This mystery is the beauty of the communion of saints. It is the mystical body of Christ that unites us all beyond our current state and surpasses all space and time. I will come back to this point at a later post and expand upon it, but currently I don’t have the time to do so here.

In the meantime, I will leave you with the video featuring some texts from St Justin.

Catholics and Relics of God’s Saints