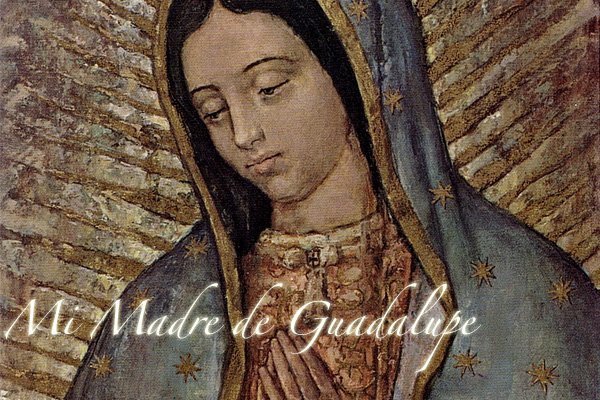 Since the Christmas of 2006, I have worn a medal of Our Lady of Guadalupe around my neck. Most Catholics see it without even thinking much about it, but protestants often take a second look at it. Most people never say anything, but I love it when I get a comment or question about the image. It gives me an opportunity to tell them about my mother.

For me, it is a big deal to wear the image of Our Lady. I went many years in my life trying to ignore Mary because I could never understand her importance in our faith. I knew she was necessary for Jesus to be born a man, but I couldn’t bring myself to accept a relationship with her. Scripture only spoke directly of needing to be close to Jesus. Why then would I have to pray the rosary or pray for her intercession?

In the fall of 2006, I was living with a community of the Society of Mary, and slowly they showed me a different side of the faith that lives in close relationship with Mary and Jesus on a daily basis. It slowly began to tear down a wall I had put in front of her in my heart. It was when a friend of mine pointed me to St Louis de Montfort’s A True Devotion to Mary.

Being a cradle Catholic, I had never read anything before that had moved my heart in the way many converts speak of their experiences. This book was different. Read his words, I found myself often fighting back tears at the breaking of my heart. My eyes were opened, and it was then I realized how much I had missed by ignoring her. I thought of how much my own mother would have been hurt her if I would have ignored her. I learned to truly accept Mary as my mother, given to me as a gift from Christ Himself. In all her purity, she only gives us His love, and Mary never keeps anything we give to her without giving it to her Son.

My life has changed in very subtle ways, but the biggest change is in my heart. Even now, there is still progress left to be made. At the end of A True Devotion to Mary there are instructions on how to consecrate yourself to Jesus through Mary. I must confess that I have not felt ready to go through the process since I have read the book. Although, I now feel a deep desire to now go through the consecration. Unfortunately, I have to wait another year to the several weeks of preparation because I would choose to do so on the feast of the Immaculate Conception or the feast of Our Lady of Guadalupe. I have a strong affinity to both because of their history in my life.

December 9th is the feast of San Juan Diego in the Roman Catholic liturgical calendar. I look to him as a shining example of how embracing our mother, we embrace heaven. I anxiously await the feast our Lady of Guadalupe on December 12th.

A great sign appeared in heaven: a woman clothed with the sun, and the moon under her feet, and on her head a crown of twelve stars;
and she was with child; and she cried out, being in labor and in pain to give birth.

Thenanother sign appeared in heaven: and behold, a great red dragon having seven heads and ten horns, and on his heads were seven diadems. And his tail swept away a third of the stars of heaven and threw them to the earth And the dragon stood before the woman who was about to give birth, so that when she gave birth he might devour her child.

And she gave birth to a son, a male child, who is to rule all the nations with a rod of iron; and her child was caught up to God and to His throne.

All stories by : Cristóbal Almanza
You might also like
5 Ways You Can Show Gratitude to Your Guardian Angel
October 26, 2017

5 Ways You Can Show Gratitude to Your Guardian Angel